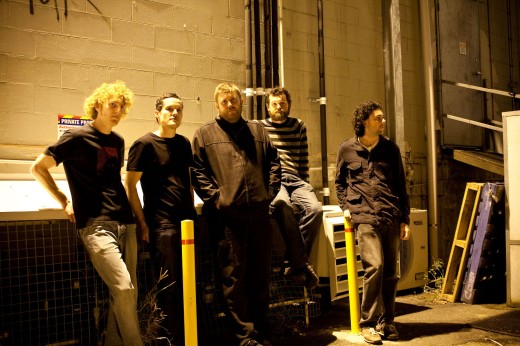 Do you like music? Seriously, do you like it? Because if you do, you probably shouldn’t miss Episode 32 of Live Delay. This week we feature the instrumental prodigies from Brisbane GHOST NOTES live on stage.  We also bring you a short interview with Cam and Jamie from the band.  Rounding out the episode, we replay the excellent live performance of HARMONY originally broadcast earlier in the year.

Forming in 2009, Ghost Notes are an instrumental five piece from Brisbane who call the likes of The Dirty Three, Tortoise and Godspeed! You Black Emperor among their various and varied influences. They released two long players,the 2011 By Cover Of Night and the very recently released Hidden Horizon.

The set we have got for you today features a few songs from the bands performance at The Beetle Bar in Brisbane back in late 2012, playing alongside the likes of Nikko, Sucks and the Keep On Dancin’s.

Find out more about Ghost Notes.

A melange of souful rock and roll and gallow blues, Harmony are one of the best bands going in Australia today. Featuring the powerful voice and guitar of Tom Lyncoln (The Nation Blue), drummer Alex Kastaniotis, and bassist Jon Chapple (ex-Mclusky), Harmony also throw in a three-part gospel choir for good measure which gives their sound even more transcendental dynamics.

Recently, they’ve followed up their critically acclaimed self-titled debut with a solid 7 inch release of ‘Do Me A Favour’ in early 2013, with their second record due to be released sometime very soon. Until then you can enjoy this exclusive live set from the band.

Find out more about Harmony.