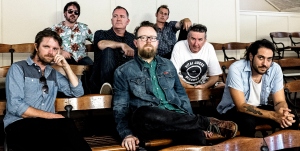 Recorded & Mixed by Branko Cosic.
Recorded at The Triffid, Brisbane, 24th of April, 2015.

The finishing touches to the lineup were added with the inclusion of ex-Go-Between John Willsteed (guitar) & Luke Peacock ‘The Bird’ (keys/guitar). Since their formation, the band has released four critically acclaimed albums, the latest being ‘Any Old Love’ in 2014. In 2008, key writers, John Busby and Chris Dale won the Grant McLennan Memorial Fellowship, arguably one of the most prestigious song writing award in Australia.

Formed in Brisbane in early 2009, The Scrapes are an unusual duo who combine feedback drenched guitar and scraping, epic violin. Their music is rooted firmly in the traditions of western classical music while representing an attempt to break the chains of these traditions. It is music that evokes landscapes and acts of nature as well as cerebral landscapes.

Inspired equally by composers such as Arvo Pärt, Philip Glass and La Monte Young, sound artists and pioneers of the drone such as Tony Conrad and Spacemen 3, and the dark, demented sounds of the underground of rock music, The Scrapes can be at once immersive and chaotic in a live setting where wild improvisation and high volume come into the fold.