Starting up in the tail end of the noughties in Brisbane, Sleepwalks is a unity between three friends, David Hansford, Kevin Fincham and Damien Masters, and their love for loud yet simply structured music, known to some as the ‘Grunge’ genre. They released their first record ‘The Milk Has Gone Sour’ in 2011 though Z-Man Records and it encapsulated their holiday to Chicago to record with Steve Albini, whose name you’ll see in the liner notes of records belonging to Shellac, Big Black, Pixies, Breeders, PJ Harvey and little known band called Nirvana.
They started writing and recording their follow-up album in 2012, but it wasn’t until 2016 until they finished and released it to the world and titled it ‘Kingdom’.
Their performances are rare to come by, so it was a treasure to capture this band picking up their instruments again and breathing new life into the raw materials. 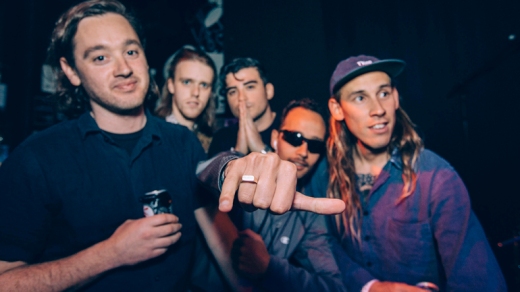 You Beauty! is not only a term you’ll hear yelled at an Australian sporting event that involves an oval-shaped ball, but is also the name of a four-piece band based in Sydney, who take their ockerisms and wear them on their sleeve. In 2014, they released their ‘pub-rock opera’ titled Jersey Flegg, which tells the tale of love and loss during the 1998 NRL season. Fast-forward to late 2015 and You Beauty have shifted their focus of love to online adventures on their second album ‘Illywacka’, which came out through Rice Is Nice Records.