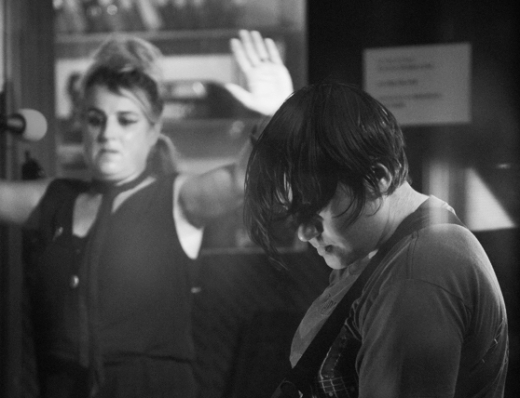 The Dacios first took to the stage in 2005, with their noisy rock’n’roll sound. Reborn from the ashes of Tasmanian band Little Ugly Girls, their lineup started with Linda J on vocals and guitar, Bean on guitar and backups, and ‘Pops’ on traps. Their dynamic live shows have earned them support slots for many high profile artists, such as Rowland S Howard, The Drones, and Eddy Current Suppression Ring. 2009 saw Linda J win the best female vocalist award at the Victorian Music Awards and also saw The Dacios release their debut album, Monkey’s Blood which then saw the band tour extensively. Their second album Beyond The Bottom Hour came out late 2016.

Hi-Tec Emotions are a fiery three piece from Melbourne, who are spinning tunes that blow off the roof. Made up of Ema Dunstan on vocals and keys, Jess Lakatosh on bass and Mackenzie Randall on drums, they make some big noise for a small band, with their relentless punk grooves combined with their self described “new wave, glow wave, blow wave” aesthetic, which makes for an unforgettable sound. Their debut full length LP ‘Hard To Handle’ came out in 2016, with standout single Look Around gaining some traction on community radio.

Miss Destiny are a rockin’, rollin’, hard partyin’ band from Melbourne, who have been tearing up the streets since 2007. Their glam rock aesthetic brings back memories of better days, when music served up tasty jams with no more than four chords. Made up of Harriet Junior, Harriet Senior, Annie and Kirk, this band brings some serious girl power to the front. Since then they have been touring internationally, playing to massive crowds and filling big venues. Self titled LP Miss Destiny came out 2016, and has expanded the band’s fan base tremendously.