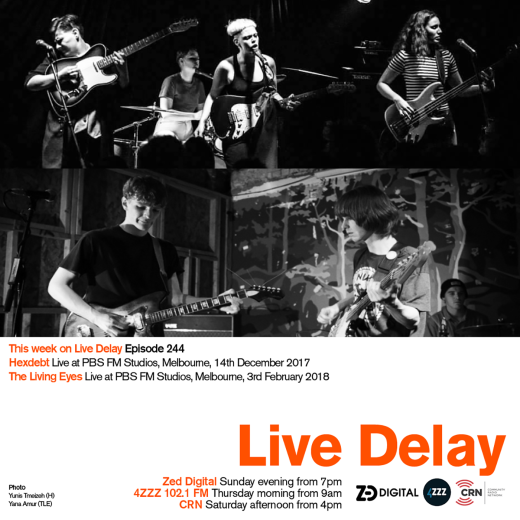 HEXDEBT have made a thundering entrance into the Melbourne punk and garage scene since their formation in a Brunswick lounge room in Mid-2016. The lineup consists of Agnes Whalan on vocals and guitar, Isobel D’cruz Barnes on bass and backing vocals, Aife Larkin on guitar and Lucy Fry on drums.

Their songs grip a tension between tightly refined technical prowess and chaotic discordance, executing the balance of both with ferocious confidence. This has earned them performance slots at Wetfest, The Bank Records Launch, and supporting all types of punk rock legends around town (PBS FM website, 2017).

Geelong locals, The Living Eyes, are a rock band of sorts, blending their own version of melodic power pop and garage. The band started out in their teenage years as a strictly 60’s garage band, playing shows with Geelong friends. Seven years later the boys have grown up a bit and so has their music.

Releasing their debut LP in 2013 with Anti Fade followed by a second full-length record, Living Large, in 2015, the quartet are back with their third LP, Modern Living. The new album comes bearing a different sound to the previous two, taking references to artists like The Monochrome Set and The Troggs, but with of course the Australian influence of bands like The Sunnyboys and The Saints (PBS FM website, 2018).