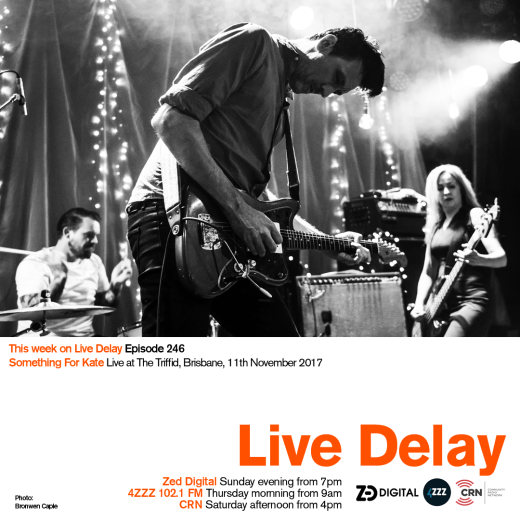 A three piece band from Melbourne, Something For Kate are comprised of vocals/guitarist, Paul Dempsey, bass player, Stephanie Ashworth and drummer, Clint Hyndman. To date they have released six Top 10 gold and platinum studio albums, a double album of B-sides, a double Best-Of album, a DVD, a live album, three e.p’s, a book to go with a mountain of singles.

From the early days the band built a varied fan base in Melbourne, recording a 7 track demo tape (which was later released as The Answer to Both Your Questions EP in 1996) that sold out of multiple pressings. This gained them the attention of Sony Music’s A&R, Chris Dunn, in 1995, who quickly signed them to the Murmur label, making them label mates with Newcastle’s very own Silverchair.

The label became their home for the next 10 years and during this time the band toured endlessly throughout Australia as well as the US, Europe & Japan. They have toured with everyone from Death Cab for Cutie to David Bowie, also playing many major festivals.

After fulfilling their commitment with Sony, Something For Kate then signed to EMI/Capitol Records Australia, releasing their 6th studio album Leave Your Soul To Science in 2012. They completed the recordings in Dallas, Texas with producer, John Congleton who has also worked with St Vincent, Explosions in the Sky and Modest Mouse. The album debuted at Number 1 on the Australian ARIA (Australian Record Industry Association) chart and number 5 on the International ARIA chart and a huge national sell out tour commenced soon after.