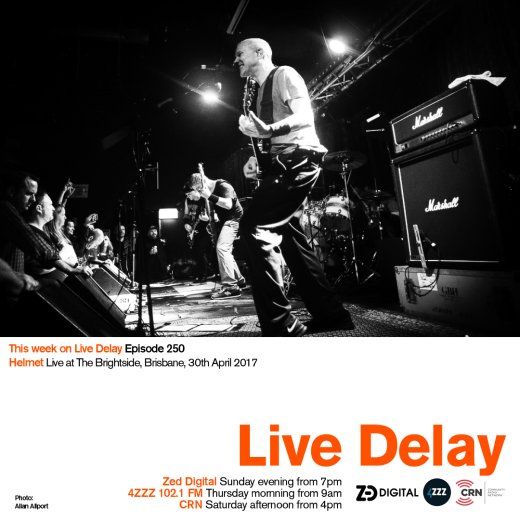 The original Helmet line up, consisting of Page Hamilton on guitar and vocals, Brisbane-born Peter Mengede on guitar, Henry Bogdan on bass and John Stainer on drums, formed in 1989 in New York City. Quickly signing to Amphetamine Reptile Records, they release their debut album Strap It On the year after.

A falling out between Hamilton and Mengede in 1993 meant Peter didn’t make the trip out, but returned to reside in Brisbane in later years. This would be the first of many line up changes for the band, with Hamilton remaining the only constant member. Once touring Aftertaste over 1997-98, Helmet disbanded before reforming again in 2004 to release Size Matters. They have released a total of 8 studios albums and remain one of the most influential bands of the alternative rock movement.

In 2017, Helmet returned to Brisbane for the first time since 2011, as part of their ‘Betty’ retrospective tour. This set features selections from the album as well as tracks from their latest LP Dead To The World and fan favourites from their lengthy back catalogue. Spliced in throughout the set is an interview conducted by Branko Cosic with founding member Page Hamilton.

Emma Donovan grew up singing church songs with her maternal grandparents on the North coast of New South Wales. Her first gigs were singing in The Donovans, a band comprised of her mother and five uncles. With her mother, Emma sang country for years, and in her youth was a fixture at the Tamworth Country Music Festival, but she always yearned for the bluesier tones of her Father’s record collection, full of American artists like Laverne Baker and Etta James and Indigenous Australian artists like No Fixed Address and Archie Roach.

Years later, after touring and recording with many of the mainstays of Indigenous music and developing as a solo artist in her own right, Emma met members of The PutBacks, and finally she found a band with the gritty blues soaked tones she had been looking for. She also found, in PutBacks bassist Mick Meagher, a co-writer and collaborator on the the soul songs she had been waiting a lifetime to write and sing. They recorded and released the record ‘Dawn’ in 2014 to mass critical acclaim and gave birth to a new style, ‘Indigenous Blues’.

With two albums, 2012’s ‘Life’ and 2016’s ‘Afterlife’, and a slew of other cassettes and twelve inch’s, the octet’s prolific diversity has garnered them praise from national and international publications who are taking notice. 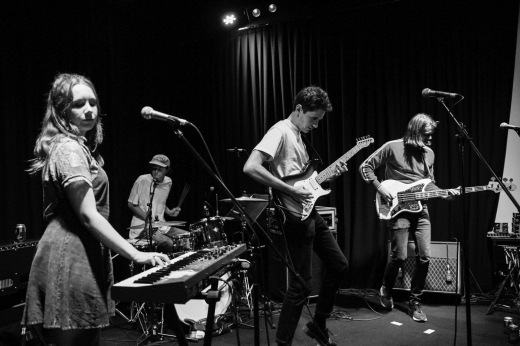 Blossoming out of the luscious Sydney music scene, Flowertruck are all about bright jangly guitars, captivating synth melodies, and honesty with their lyricism. Their latest shows include support slots for Bad Dreems, Methyl Ethyl, Sticky Fingers, and Major Leagues, and in early 2016 they released their EP Dirt through the legendary Spunk Records label. Their cheerful sounding tunes and straightforward, truthful song writing will leave you in a state of happiness that can only be delivered via Flowertruck.

Coming from the somewhat secluded island state of Tasmania, Tiger Choir create soundscapes as rich and luxurious as their surroundings. They elegantly combine swirling synth lines, prickly and sporadic guitars and deep bass lines with big choruses that you can’t help but shout along with. Airing details: Originally via Zed Digital, 7-8pm, Sunday 29th April 2016.

Straight out of Sydney, the punks from Ted Danson With Wolves have an infatuation with long names and even longer jams. Their latest EP “Don’t Tell  Me What’s Wrong With You Because I Will Find Out And Tell You. It Will Make Sense To You And Work” may only be three songs but it runs well over the 15-minute mark. Their sound is a combination of raw DIY aesthetics, technical and intricate instrumentation that has been lightly smoothed over by sandpaper made of jazz thanks to the always present saxophone strung around the neck of frontman Nick Levi. 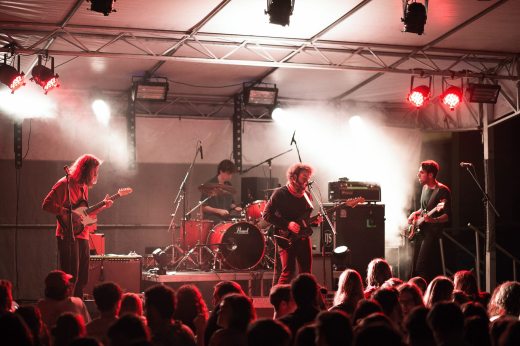 It’s not too often a psych band comes out of Brisbane, with a majority of bands tending to favor the cities punk roots, but Twin Haus have come along to prove that the sunshine state is more than capable of producing top tier psychedelic tunes. Their sound is a compilation of layers that draw you further in with each listen, drifting between prog riffs to delicate melodies and topped with soft and somewhat calming vocals. This set was recorded especially for 4ZZZ during Live Music Week and the day before their latest EP ‘Nothing Lavish’ was released. Many thanks go out to Danielle Engen and Daniel Grima for making this set happen. 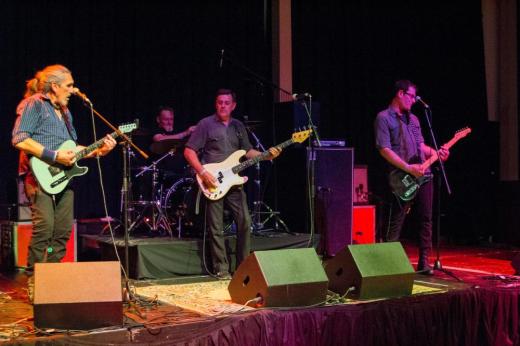 Making their mark all the way back in 1976 during the great Brisbane punk era, The Leftovers are cult heroes in the punk scene. Sticking true to the punk rock ethos, the leftovers were known for their raw, high energy DIY performances in self promoted hall shows that like most other bands at that time, attracted significant attention from the Queensland Police Service. 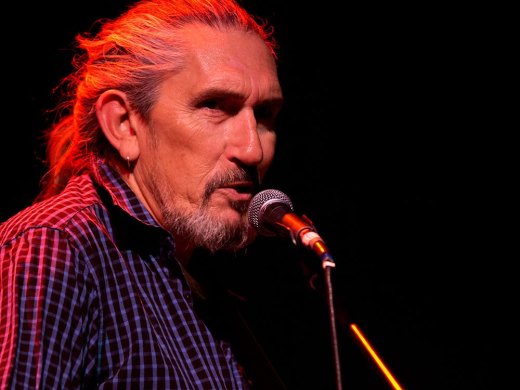 Starting off in 2006, Lovecraft is comprised of a few veterans of the Brisbane music scene featuring members from lovs e blur, the black market, the sharks and the band from the first half of this show, The Leftovers. Their sound takes an influence from the dark swamplands of Deagon in north Brisbane where the band currently reside.

Kitchen’s Floor was formed in 2007 by Brisbane based musician Matt Kennedy. Amongst various EP’s, 7″ singles and live albums, the band have released 3 full length studio albums to date – Loneliness Is A Dirty Mattress (2009), Look Forward To Nothing (2011) and Battle Of Brisbane (2015). These recordings have been released through independent labels such as Siltbreeze, Bedroom Suck, R.I.P Society, Negative Guest List, Quemada, Easter Bilby, and Breakdance The Dawn.
In this particular set, Matt had come back from touring Europe in solo mode and continued the trend for this particular show.
Many songs from the Kitchen’s Floor discography appear in this set in a stripped down form and you can hear Matt compensating for the lack of extra guitars with his melodic playing. 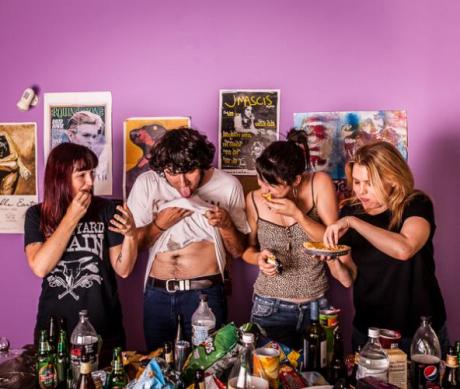 Originating from the stifling humidity of Townsville, North Queensland, The Bear Hunt moved down to Brisbane late 2012 with one EP in hand, and thought it fitting to re-record many of the original EP tracks to better reflect the band’s changing sound in the form of their first full length album “TBH [To Be Honest]”, which was released in October 2015. Their sound is raw and disheveled but somehow tight, full of heroic stoner groove riffs. True garage rock mingled with the occasional touch of blues, country and psychedelia.

Super Best Friends are a trio from Canberra known for their mix of gritty punk songs with memorable hooks and strong political themes. Super Best Friends came to the attention of the masses in 2013 with the release of their single ‘Round and Round’, which featured cameo appearances from most of parliament house including Kevin Rudd, Tony Abbot, and Clive Palmer. Their debut album ‘Status Updates’ was released in early 2015 on Gun Fever Records and features songs about friends, social media addiction and the state of Australian politics. Their live shows perfectly demonstrate their level of energy and rage that makes these songs all the more powerful.

Weak boys are a group of 30 something year olds who like to sing about your everyday life and the problems we all face like landlords, hangovers, and running out of wine. Their members Matt Banham, Craig Lyons, and Chris Yates have all played in other memorable bands over the years including Dollar Bar, No Through Road, and Little Lovers, which make them a super group of sorts. Their songs are a flawless mixture of bright jangly guitar pop, with subtle glum undertones that feel like the soundtrack to a Sunday afternoon after a big weekend. 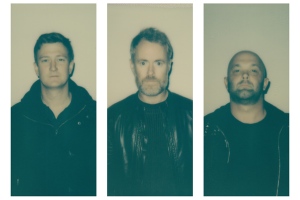 The Peep Tempel
Recorded & Mixed by Branko Cosic.
Recorded at The Brightside, Brisbane, 16th of May 2015.

The Peep Tempel started in 2008 when neighbours Blake Scott and Steven Carter began jamming and recording songs in their home studio. After releasing two 7-inch singles they ramped it up and added a bass player to the mix. Since then they have toured both here and in Europe, as well as released an EP and two full albums to much praise including shortlisting’s for the Australian music prize, and song of the year at the APRA Awards. A review from this particular set described their set as “Ferocious and fun, a winning combination”. 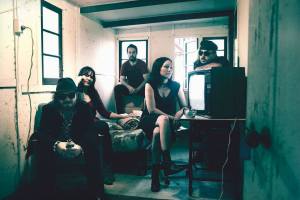 HITS
Recorded & Mixed by Branko Cosic.
Recorded at The Triffid on the 3rd of May, 2015.

The first band we’re going to hear from have a no-nonsense name that confidently describes the caliber of songs they write.
That band’s name is HITS. Having just celebrated their tenth anniversary as a band, they’ve lived more in that time than some bands would dare to imagine. With the twin guitar attack of Tamara Dawn and Stacey Coleman, vicious vocals from Dick Richards and solid backbone of Andy Buchanan and Gregor Mulvey, their live show effortlessly blow the minds of punters that come in contact with their extremely loud take on rock music. The latest record from HITS, 2014’s ‘Hikikomori’ was produced by legendary rock’n’roll figure Rob Younger, he of Radio Birdman and New Christs fame, and has been getting rave reviews from not only Australia, but Europe too. It was also longlisted for the 2014 Coopers Australian Music Prize. This particular set that we are about to listen to was captured at their 10th anniversary birthday show and is one of the finest documents of this bands live presence.

Having played relentlessly for the last 5 years all over the east coast of Australia, Zeahorse have gained a reputation for being one of the best live bands around Australia. They were nominated for best live act in the 2013 FBi SMAC awards, and have supported many incredible acts such as The Black Angels, Them Crooked Vultures, Jello Biafra, The Mark of Cain and the Hard Ons.
Their debut album Pools was released in 2013 to much critical acclaim, and went on to secure a North American release through Dine Alone Records in September last year.

Many thanks to Harvey O’Sullivan from FBi Radio’s Live Feed for his assistance.

Asha Jefferies
Recorded & Mixed by Branko Cosic.
Recorded at the 4ZZZ Car Park on the 18th of April, 2015.

Growing up in Brisbane, Asha Jefferies has many musical influences, including Ben Harper, Paul Kelly, Missy Higgins and Jeff Buckley. At the age of 11, Asha started playing guitar and soon after started writing songs. Her songs are characterised by distinctively silky, smoky vocals, and beautiful lyrical melodies expressing experiences of the heart and observations of the human dimension.
She regularly plays at Woodford Folk Festival, Regional Flavours Festival, Cleveland Buzz Festival, and the Urban Country Music Festival and has toured to the Darling, Southern & Western Downs with fRETfEST. 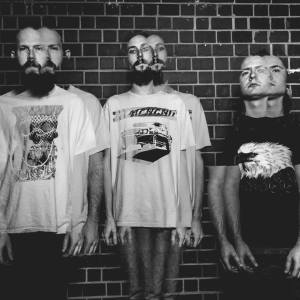 Skullcave
Recorded & Mixed by Branko Cosic.
Recorded at The Haunt on the 25th of April, 2015.