Kicking off his career on keys and guitar in the critically-acclaimed Brisbane group Halfway, Luke Daniel Peacock has since become a prolific songwriter in his own right. In 2014, he was the driving creative force for the groundbreaking project, The Painted Ladies, a group that revived the lost songs of Vic Simms in an album titled ‘The Painted Ladies Play Selections From The Loner’. This collaboration was produced by Rusty Hopkinson from You Am I and featured The Medics, Paul Kelly, Ed Kuepper (The Saints/The Laughing Clowns), Ian Haug (The Church/Powderfinger), John Willsteed (The Go-Betweens), Phil Noy & Eugene Ball (The Bamboos), Bunna Lawrie (Coloured Stone) and many more. In February 2016, he released his first solo album titled ‘We’ve Come A Long Way Darling’ to much praise, including a Queensland Music Award for his song ‘Fruits Of Our Labour’, as well as receiving the prestigious Billy Thorpe Scholarship Award in 2016. His work sounds like a modern day Australian version of Bruce Springsteen, and he’s well on his way to becoming a legendary artist in his own right. 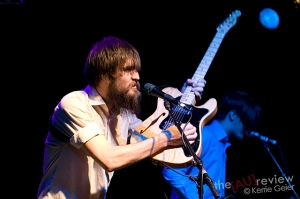 Coming from Sydney, Jonathan Boulet released his self titled debut solo album in 2009 through Modular Recordings. His debut record was written, recorded, played and produced by himself in his small garage studio. The album was released to much praise and earned him a spot on the Splendour In The Grass lineup in 2010. His second album ‘We Keep The Beat, Found The Sound, See The Need, Start The Heart’ was released in 2012 which further solidified his ability to write catchy, high energy indie pop. After playing a string of international shows and showcases at SXSW, Jonathan took a year off in Berlin to work on new music. What emerged in 2014 was a radically different beast from his previous work. Now signed to Popfrenzy Records, his latest album Gubba is nothing but rock n roll with big drums, face melting guitars, and heavy thumping bass lines.