Brisbane rock n’ roll revivalists Port Royal formed in 2015. Their current line up consists of Lawson Doyle on guitar and vocals, Liam Morton on lead guitar, Chase Brodie on bass and Connor Arnold on drums. They unleashed their debut EP The Express in May, 2016 which earned them support slots for The Delta Riggs, Cherry Dolls and Wolfmother.

2017 saw the release of single “Get Heavy” which landed in 2nd place in the 4ZZZ Hot 100 countdown of 2018. Playing a host of dates across the east coast of Australia earned them an enthusiastic following. The Love, Passion, Satisfaction EP was released in August 2018 with a heavy run of touring to support.

Elder are Matt Burton on vocals and guitar, Thomas White on bass and vocals and Talia Bond on Drums. Their debut single “Vagabond” gained strong radio support soon after its release in December, 2017. Since then they have shared bills around Brisbane with Andrew Tuttle, Good Boy, Chakra Efendi and Yukon Era (NZ). 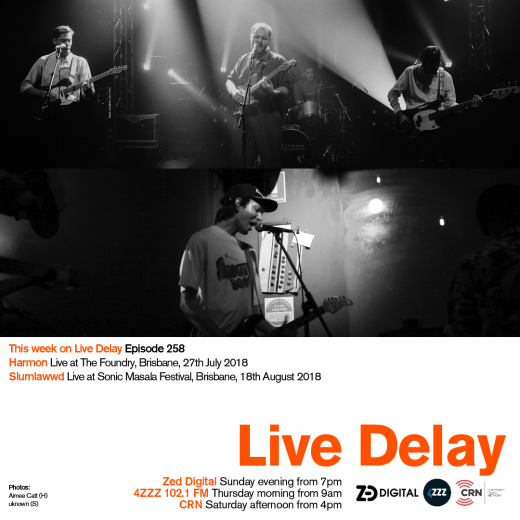 Harmon is the musical project of singer and multi instrumentalist Harmon Ferret. Growing up surrounded by music and developing his sound from many hours spent in the home studio, he released his first single “Nerve” at the age of 17. 2018 has seen the Brisbane based musician  release two more singles in “Wasting Time” and “A New Colour.”

Slumlawwd is the brainchild of Brisbane favourites We All Want To bassist Scott Mercer. With tongue firmly in cheek, Slumlawwd is experimental in both performance and production. The band released their debut EP Manifestering Destiny in August 2018. 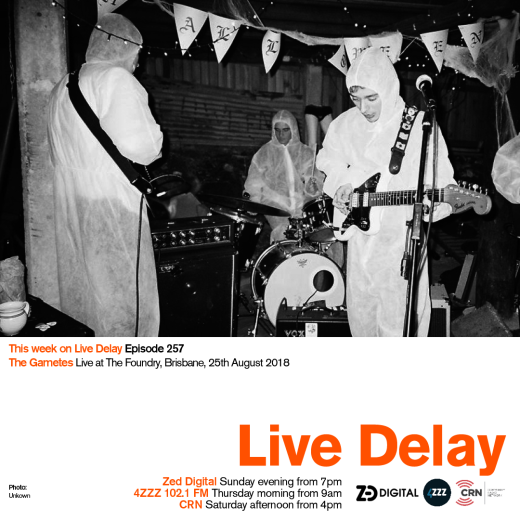 Forming in 2017, the Gametes are Tom Harden on guitar and vocals, Charles Deicke on guitar, Hunter Davis on bass and John Beckinsale on Drums. The Brisbane 4 piece have supported the likes of Jacuzzi Boys (USA) and Chakra Efendi with their unique, audio-visual based live show.

Combining outrageous costumes and quirky stage projections with their polyrhythmic surf punk sound, the Gametes have created an enthralling piece of performance art, earning them a reputations as one of Brisbane’s best live bands. Their debut LP The Astronomical Calamities Of Comet Jones was released in August 2018 by local indie label Coolin’ By Sound. 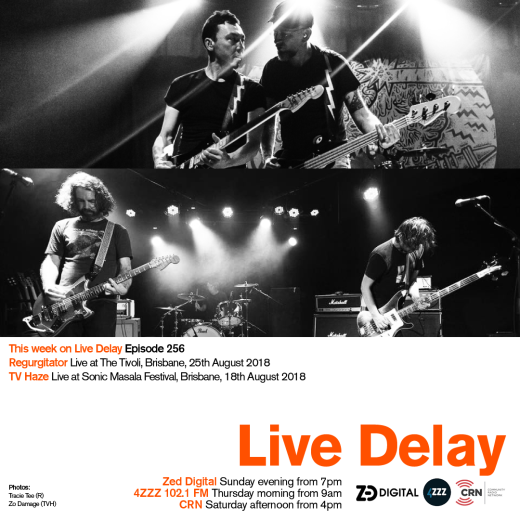 Brisbane’s own Regurgitator formed in 1994 originally as a side project for members Quan Yeomans (guitar, vocals), Ben Ely (bass, vocals) and Martin Lee (drums). Quickly signing to Warner, the band released 2 EP’s before their first full length Tu-Plang in 1996. Following up with Unit a year later, The ‘Gurge solidified themselves as Australia’s premier alternative rock band.

A slew of ARIA’s, a new drummer (Front End Loaders’ Peter Kostic), a reality TV show, a best of and a whole heap of record sales followed. The band have released a total of 10 studio albums with their latest Headroxx released in August 2018 through Valve Records, a label run by longtime manager Paul Curtis.

TV Haze are Dylan Stewart on guitar/bass/vocals, Andy Hayden on bass/guitar and Sarah Thompson on drums. Forming in 2015, the Melbournians have already released 3 albums over 18 months, the last of which, Circle The Sun, was released in April 2018 through Poison City Records. Their sound takes a soulful and nostalgic journey back into sepia-toned, hook filled indie rock. 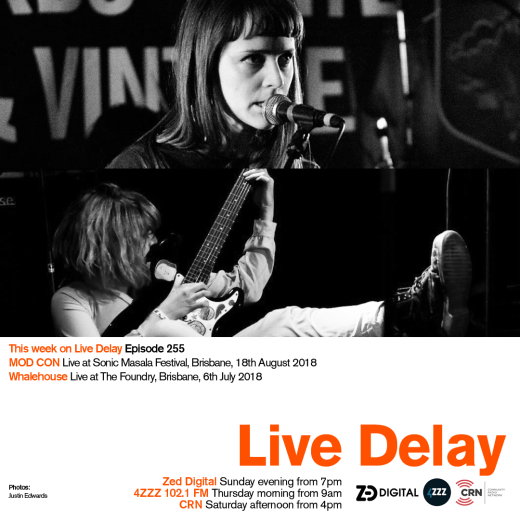 Originally playing as the alt-country band Palm Springs, MOD CON is the collaborative project of Erica Dunn, Sara Retallick and Raquel Solier. “Do It Right Margo” – The first single from this new incarnation was released in late 2017 via Poison City, and the band have been on the rise ever since, putting out their debut LP Modern Convenience in the first half of 2018.

Born and bred Brisbane band Whalehouse are a new wave punk outfit influenced by the likes of Devo, The B-52’s and Blondie. Zoe Wilson, Amy-Rose Lawson and Sonya Chamberlain became friends in high school and began playing together soon thereafter. They have shared the stage with L..A. Witch, Iron Chic, WAAX, Velociraptor and The Orwells. 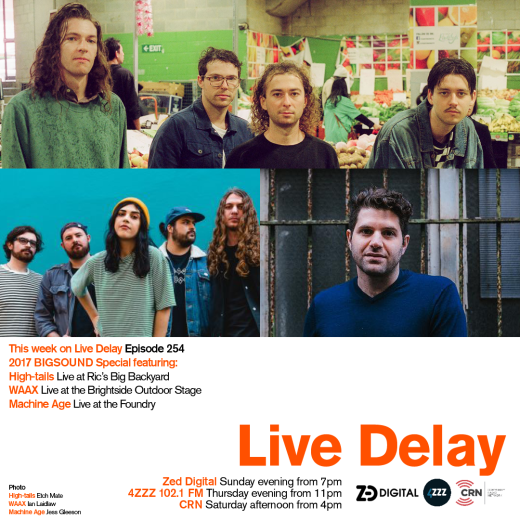 Adelaide guitar heroes Horror My Friend summon the spirit of alternative rock and shoe gaze, whilst breaking new ground and embedding themselves firmly in the present. Consisting of Josh Battersby, Tom Gordon & Sam Kolesnik, the trio put out 2014’s A Million Hands EP before signing to Poison City Records and releasing their debut album Stay In / Do Nothing in 2016.

During this time, Horror My Friend have supported likes of Die! Die! Die! (NZ), Pity Sex (USA), Violent Soho, The Cribs (UK) and Swervedriver (USA), as well as performing at Groovin’ The Moo, Yours & Owls Festival, Bigsound, Blurst of Times and Poison City Weekender. The band have followed up their debut with a string of critically acclaimed singles, all released through Poison City.

Ultrafeedy are a 3 piece rock band hailing from Brisbane’s northern suburbs. Since their self titled EP release in 2014, the band have been steadily honing their craft whilst putting on energetic live performances. 2017 saw the release of their first long player Aggressive Sincerity, paying homage to the 90’s socal punk and desert rock scenes.

RACKETT are made up of Bec Callander on guitar and vocals, Kat Ayala on lead guitar, Ally Gavin on bass, and Astrid Holz on drums. Based in Sydney, the band have been steadily rising since their inception in 2016, releasing their debut EP Ready Or Not in 2017 with Dave Hammer (Washington, Thundamentals, Born Lion) producing.

Since then Rackett have played in major theatres and festivals throughout Australia, receiving regular airplay on community radio and reaching the finals of the inaugural VB Hard Yards competition in 2017. They have supported the likes of DZ Deathrays, The Darkness, Killing Heidi and Bleached, also appearing at  Groovin the Moo (2018), Festival of the Sun and Secret Garden Festival.

In early 2018 the band released two singles Alive and Space Cadet, which they produced, recorded and mixed themselves. This show was taken from a run of dates in support of the latter and showcases the bands captivating live performances.

Hailing from New Jersey, Nights Birds play surfy, punk rock whilst paying homage to the hardcore movement of the 80’s. Since 2009 they have released a total of LP’s, including their latest effort Mutiny At Muscle Beach through Fat Wreck Chords, as well as a handful of 7 inches. The four piece are known for their extremely energetic live performances and fiercely DIY ethos.

Sydney’s Greenwave Beth is the musical project of Flowertruck vocalist Charles Rushforth and Will Blackburn. They combine restrictive and industrial sounds of midi sequenced drum and bass with free form songwriting in the style of John Maus and Suicide. With their debut single “Make Up” being released in 2017, Greenwave Beth have supported the likes of Hockey Dad, Big White and Mere Women.

The original Helmet line up, consisting of Page Hamilton on guitar and vocals, Brisbane-born Peter Mengede on guitar, Henry Bogdan on bass and John Stainer on drums, formed in 1989 in New York City. Quickly signing to Amphetamine Reptile Records, they release their debut album Strap It On the year after.

A falling out between Hamilton and Mengede in 1993 meant Peter didn’t make the trip out, but returned to reside in Brisbane in later years. This would be the first of many line up changes for the band, with Hamilton remaining the only constant member. Once touring Aftertaste over 1997-98, Helmet disbanded before reforming again in 2004 to release Size Matters. They have released a total of 8 studios albums and remain one of the most influential bands of the alternative rock movement.

In 2017, Helmet returned to Brisbane for the first time since 2011, as part of their ‘Betty’ retrospective tour. This set features selections from the album as well as tracks from their latest LP Dead To The World and fan favourites from their lengthy back catalogue. Spliced in throughout the set is an interview conducted by Branko Cosic with founding member Page Hamilton.