Isaiah and his beloved Fender Stratocaster have been a legendary pairing that have collectively created creamy psychedelic sounds for records from such bands as Earthless, Golden Void, Howlin’ Rain and Black Elk Medicine Band.

He was gifted with his first guitar at the age of Eight, but it wasn’t until his early teens when he’d heard Jimi Hendrix and had his mind blown that he decided what sort of lifestyle he wanted to persue; it was that of a face-melting, hair-swirling solo guitarist.

In September 2016, he booked himself a tour of Australia and enlisted the help of Melbourne psych-rock 3-piece Seedy Jeezus to help fill out the jam-filled aura that surrounds him.

This particular set was performed live-to-air in Melbourne on PBS 106.7FM’s Pojama People program and is filled with songs that have influenced Isaiah as a musician since he first picked up a guitar, as well some of his own solo works. 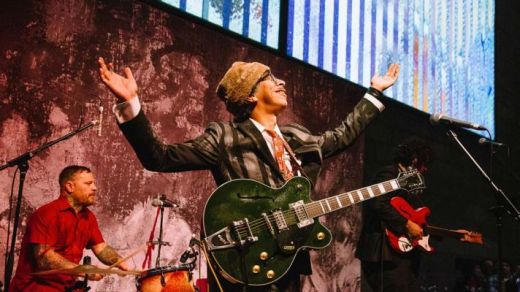 To his mother, he’s called Brian, but to the rest of the world his name is Kid Congo Powers and his name has been attached to bands such as The Gun Club, The Cramps and Nick Cave and The Bad Seeds.

The Pink Monkey Birds started backing up Kid Congo in the mid-2000’s and together they’ve release five albums, touring around Australia in 2016 on the back of their latest album ‘La Araña Es La Vida’, from which this particular set was documented from by PBS 106.7FM’s Studio 5 Live crew.

This band is the very example of the sound that gets created when you mix 60’s Chicano rock, southern soul and psychedelic funk.